Today, St. Patrick’s Day is celebrated in many places around the world, including Ireland, Great Britain, the USA, Canada, Australia and New Zealand. Many places have festivals and parades – sometimes rivers or fountains have green-coloured water and landmarks are lit up with green lights.

Many people celebrate St. Patrick’s Day by wearing green clothes, eating and drinking green-coloured foods and drinks, having parties, having festivals and going to parades.

St. Patrick’s Day parades happen in several cities around the world. There is usually Irish dancing and music, as well as colourful floats and decorations. Many people wear green costumes and clothing, often decorated with shamrocks or leprechauns.

The colour green is often seen during St. Patrick’s Day celebrations. It is seen as the colour of Ireland. Many people wear green clothes, eat green foods, drink green-coloured drinks and decorate houses and shops with green decorations such as shamrock leaves.

Shamrocks are symbols often seen during St. Patrick’s Day celebrations. Shamrocks are small green plants that have 3 or 4 small leaves.

Leprechauns are another symbol of St. Patrick’s Day. These are a type of fairy from traditional Irish stories. They are usually shown as little men, wearing green clothes and a green hat. Some people believe that they hide pots of gold at the end of rainbows and that if you catch a leprechaun, he will grant you three wishes. They are known for causing mischief!

On St. Patrick’s Day, it is traditional to eat cabbage and corned beef, often served with potatoes and carrots too. Some people also like to make cakes and biscuits and other sweet treats and decorate them with green icing or green sweets. 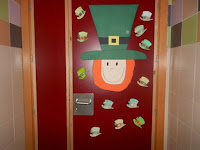 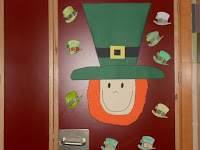 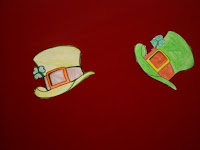 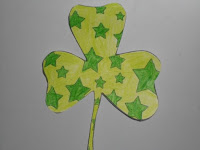 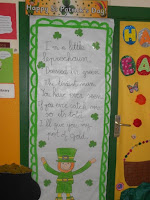 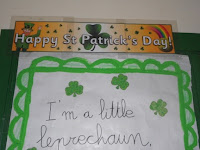 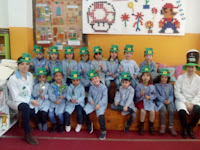